“My experience with the Women’s Leadership Institute was profound, exhilarating, and life changing for me – I know many of the ladies were touched by your life story and your contributions to society. You are a true inspiration to me and I will never forget anything I felt and learned…..”
– Leadership Program participant

Jennet Robinson Alterman is a native of Charleston, S.C. and has worked in television broadcasting, state and federal government and the nonprofit sector. 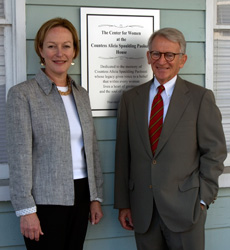 Dedication of new Center for Women building in 2007. Jennet with Mayor Joe Riley.

Before starting her consulting business in August 2013, Jennet Robinson Alterman was the Executive Director of the Center for Women, a nonprofit organization serving the Charleston S.C. Region (2001-2013). The Center for Women’s mission is to help women find personal and professional success. Under her leadership, the Center for Women grew to become the largest and most comprehensive women’s development center in S.C.

Under her leadership, the Center for Women received numerous grants and awards,
including the Award for Excellence in Non‐Profit Management from the S.C. Association of Non‐
Profit Organizations in 2005, Oprah’s Angel Network Grant from Oprah Winfrey in 2006, the
Family Circle Cup Tennis Tournament’s official Charity of Choice for 5 years (2006 to 2010), the 2009 Charleston Metro Chamber of Commerce’s 1773 Award for excellence in the Public/Non‐Profit Sector and the People Against Rape’s Outstanding Victim Service Program in 2009. 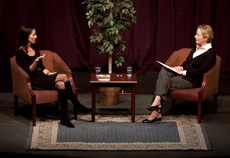 In 2011 The U.S. Small Business Administration awarded the Center for Women a 5 year grant to develop and implement a statewide women’s business support center.

For her work in developing programs that support and enable small business ownership by women she has been recognized by both the U.S. Small Business Administration and the U.S. Association for Small Business and Entrepreneurship.

In 2013 Ms. Alterman was chosen to represent S.C. as the state’s delegate to Vision 2020, a national initiative advancing women’s economic and social equality through collaborations with affiliated organizations and members in 50 states.

Ms. Alterman is very active in community affairs and is the Vice Chair of the Charleston County Housing and Redevelopment Authority, the Chair of the Board of the Women’s Rights and Empowerment Network (WREN), and a member of the Community Advisory Board, Women and Gender Studies Program at The College of Charleston.  She has previously served on the following boards: The Spaulding Paolozzi Foundation Board of Directors, Charleston Metro Chamber of Commerce, S.C. Independent Colleges and Universities Association, New Morning Foundation, College of Charleston Graduate School Advisory Board, Trident Urban League, Trident Workforce Investment Board, Advisory Council of Charleston Area Therapeutic Riding, Advisory Board of the Junior League, and Footlight Players.

In her earlier career, Ms. Alterman worked as a television news reporter and anchor and during her tenure with S.C. state government was Deputy to Lieutenant Governor Nancy Stevenson, the first woman elected statewide in S.C.

She began her international career by serving as a Peace Corps Volunteer in Afghanistan (1977-78), Peace Corps Country Director in Swaziland (1987-90) and was the Interagency Coordinator for Peace Corps worldwide in Washington D.C., working on projects in over 40 countries. She was responsible for worldwide programs in Micro‐Enterprise Development, Women in Development and Environmental Education. (1990-95).

“Although I am new to Charleston, and didn’t get to see first hand your incredible contributions to women and the rise of the C4W over the last decade, your name was always first on the lips of every woman of influence that I met since I moved here — you must meet Jennet! And, after having had the opportunity to talk with you and attend a number of C4W events, I can see why. As a recipient of your efforts, I want to thank you for making it easier for women to live into their full potential here in SC. Your strength, intelligence, diplomacy and dedication to making a difference will be your legacy to women who follow.”

"I appreciate your directing that unwavering enthusiasm of yours towards my career and encouraging me to think bigger. With your confidence in mind I will look forward to carving out a new path."
– Mentee